Young Lions ready to go to Liechtenstein - Reach out for a medal!

On these days, the young Luxembourg Lions (U19) will participate in the final round of the U19-SCD Finals in Liechtenstein. During three days (from 29th April to 1st May) the young players of the coach team Herman Vleminckx-Huybens and Christian Schanet will compete in the European Championship U19 of the Small Country Division. As opponents the teams from Liechtenstein (organizer), Faroe Islands, Scotland and Wales will also try to get a place on the podium. All the teams are able to play for the victory, for a lot of the players from all the teams it will be the first bigger international tournament in their career.

The young Luxembourg lions had a successful preparation with two games versus the two Luxembourg Teams of Bertrange (1-3) and Steinfort (3-2) and next to normal practice sessions in the Coque also a 3-day internship in Esch/Alzette. During the last months the coach staff recruited nearly 20 players who did great progresses in physical, technical and hands-on scopes. The selected 12 players will be able to go for a medal; the goal is to play for Gold. 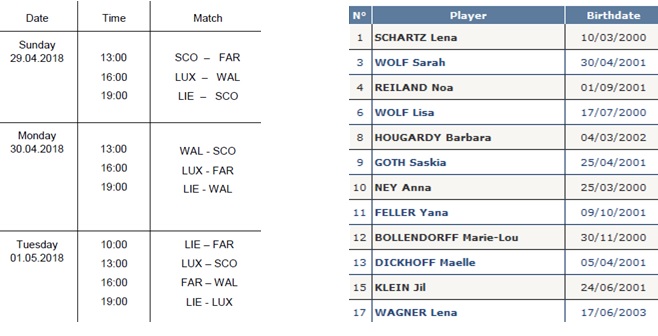