Cyprus got off to a shaky start in the first set, but quickly recovered for a 3-1 (24-26, 25-17, 25-18, 25-15) win over Luxembourg in the final, to claim the title at the 2016 Men’s U20 Volleyball European Championship Small Countries Division.
It was Cyprus’ third title in five editions of the competition. Luxembourg, who were seeking to climb to the top of the podium for the first time since 2008, had to be content with their fourth silver in the 10-year history of the competition.
The hosts could have made their life easier, had they not blown two set points in the first set, allowing Luxembourg to come back from 22-24 down and take an early lead.
Led by tournament MVP Stephanos Haridimou’s 28 points and an impressive attacking efficiency of 67% (26/39), Cyprus bounced back to take the next three sets and clinch their third title in five editions of the competition. Nikolaos Eleftheriou added 18 points for the winners and contributed to their overall attacking of 54%, compared to Luxembourg’s 35%.
Charel Hoffmann and Steve Weber scored 18 points each for Luxembourg, who out-blocked Cyprus nine stuffs to six claiming both middle blocker positions on the tournament’s Dream Team. 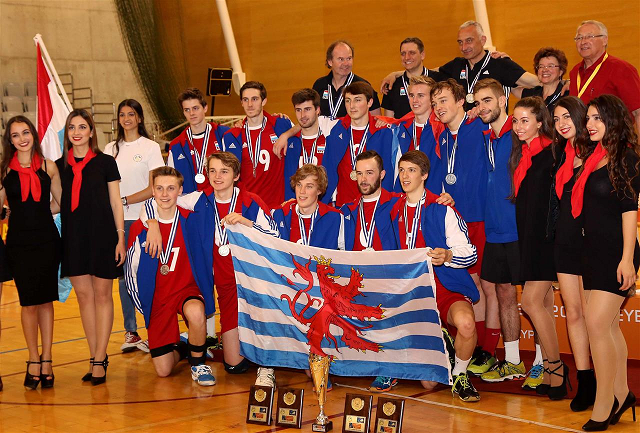 Luxembourg, who had beaten Scotland on Saturday evening, made sure of silver with a straightforward 3-0 (25-7, 25-9, 25-19) win over Northern Ireland, who finished winless. Emie Tarantini contributed 16 points.