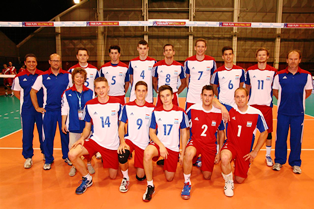 Luxembourg claimed the status of the favorite in Pool B in the Small Countries Division of the 2015 CEV Volleyball European Championship - Men shutting out Friday’s winner Scotland by 3:0 (25-22, 25-14, 26-24) on day two in Iceland’s capital Reykjavik and topping the current standings before Sunday’s last match of the pool, against the home team.

This encounter was a replay of last year’s final. Only the results were different. The Scots were the pre-match favorites, but Luxembourg had other ideas. The Lions had a bright start of the game and kept Scotland under a lot of pressure from service. This resulted in a lot of troubles for the Scottish offense, since their strong middle blockers were unable to deliver like in the match against Iceland. Only in the last set Luxembourg were really troubled when the Scots came back from 6 points down to even the score at 24-24. With some powerful attacks from Seain Cook, they managed to raise the excitement level in the hall.

Seain Cook became the top scorer of the match with 13 points for Scotland. Kamil Rychlicki and Arnaud Maroldt scored 12 points each for Luxembourg.

Burkhard Disch, head coach of Luxembourg: “We played some good volleyball today. We were strong tactically, especially in block-defense. The preparations we have made – playing stronger teams, is paying off.  In addition it was good to take revenge for last outing when we lost to Scotland.”

Gordon Welsh, head coach of Scotland: “The better team won tonight – as simple as that. We came under a lot of pressure from their serves. When we managed to play at our level, we gave them trouble.  Unfortunately we were unable to keep that level throughout the game.”

Luxembourg topped the final standings in qualification Pool B of the 2015 CEV Volleyball European Championship - Men's Small Countries Division. The team from the Grand Duchy will participate in next year’s finals as organizer anyway, so it was the home guys from Iceland that really needed that victory from the last match in Reykjavik. However, but coach Burkhard Disch’s guys persevered to win by a dramatic 3:2 (18-25, 26-24, 25-16, 29-31, 16-14), leaving Iceland at home and sending Scotland to the Final Round.

Before the match, the captain of the Icelandic team Emil Gunnarsson received flowers from Icelandic Volleyball Federation President Jason Ivarsson for reaching 100 caps for the national team. After a disappointing opening match, the Icelandic team went off to a flying start – winning the first set by 25-18. The Lions upped their game in the second set leading by 8-6 and then by 16-14 in the second. The Icelanders closed the gap at 22-22, but the Luxembourgish offense finally managed to find ways past the block, taking the set by 26-24. The third set was all about Luxembourg which took an early lead and never looked back for an easy 25-16 win courtesy of the too many mistakes from the Icelanders. The home team fought back with some good blocking in the next set keeping the Luxembourgish attacks at bay and resulting in a 31-29 win. Off to the fifth set, the first of the tournament, the teams battled hard and the tensions were high. In the end, the Lions managed to edge out the home team by 16-14 and win the match by 3:2.

Luxembourg’s Frantisek Vosahlo was the best scorer of the match with 23 points, followed by Iceland’s Robert Karl Hlodversson with 20.

Burkhard Disch, head coach of Luxembourg: “I am happy with the win, but not with the performance. The Icelandic team surprised us with its defense and its performance today gives us a warning for the small states games next year. This marks the end of our season, which has been one of the busiest ever.”