Luxembourg lived up to everyone’s expectations and eventually won gold at the 2014 CEV U19 Women Volleyball European Championship – Small Countries Division by sweeping four matches in a row. On Saturday morning the players from the Grand Duchy opened the program of the last competition day with a speedy 3:0 victory (25-1, 25-11, 25-7) over rookies Wales to cement their leadership in the final standing. After having to be content with bronze two years ago – Cyprus and Scotland had claimed gold and silver respectively – the Grand Duchy could celebrate their fourth title in the competition after topping the charts in 2006, 2008, and 2010. The home side of San Marino eventually settled for a historic silver medal after edging Wales in three sets with the podium rounded out by the Scots who on the last day of the tournament got past the team of Liechtenstein in three sets as well.

The young players from Wales – who made in Serravalle their debut in an international competition – did not stand a chance as they played Luxembourg on Saturday morning; they could keep the pace of their opponents only for a short while in the second set after both teams had changed most of their starting players and Luxembourg head coach Ranguel Krivov had opted for his second lines. Three players from the Grand Duchy finished the match in double digits, with team captain Jil Bosquee topping the charts with 13 points, followed by Liz Beffort and Cindy Schneider with 12 and 11 respectively. Wales scored only three direct points throughout the match, with all other coming from errors made by their opponents. 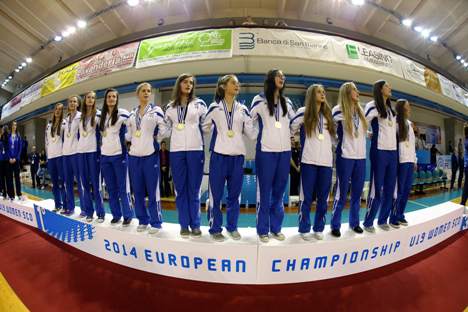