For the first time in the sport's history, LuxSittingVolley in cooperation with the Fédération Luxembourgeoise de Volleyball, the Luxembourgish Paralympic Committee, ParaVolley Europe and VolleySLIDE is running a #SittingVolleyball Level 1 Coaching Course this coming May, alongside the 2017 CEV Volleyball European Championship Small Countries Division – Men qualifications.

The course is open for applications from all over the world and will take place from the 13th to 16th May 2016. It is the first step on the world coaching qualification pathway aimed at national / regional coaches.

The course will be ran at the ‘Coque’, the National Sports and Culture Centre which is located in the heart of the Grand Duchy of Luxembourg on the Kirchberg Plateau.

Jouke de Haan and Matt Rogers will together tutor the course, each offering their own unique perspective of what is required to be an introductory Sitting Volleyball coach.

Jouke has a wealth of coaching experience at all levels, but most notably is the former Head Coach of The Netherlands, Germany, Egypt and Rwanda men’s national teams whilst currently acting as the Chair of the World ParaVolley Coaches Commission leading on the implementation of the 3 level coaching pathway for Sitting Volleyball.

Matt is the founder and leader of VolleySLIDE, the world education programme for Sitting Volleyball, the Paralympic form of the sport.  He previously led on the creation and establishment of the English club network and was the programme manager of the British teams.  Matt now combines his voluntary involvement in Sitting Volleyball with his position at the CEV as the Competitions Coordinator.

For more information about how to start Sitting Volleyball in your country/area, go to www.volleyslide.net 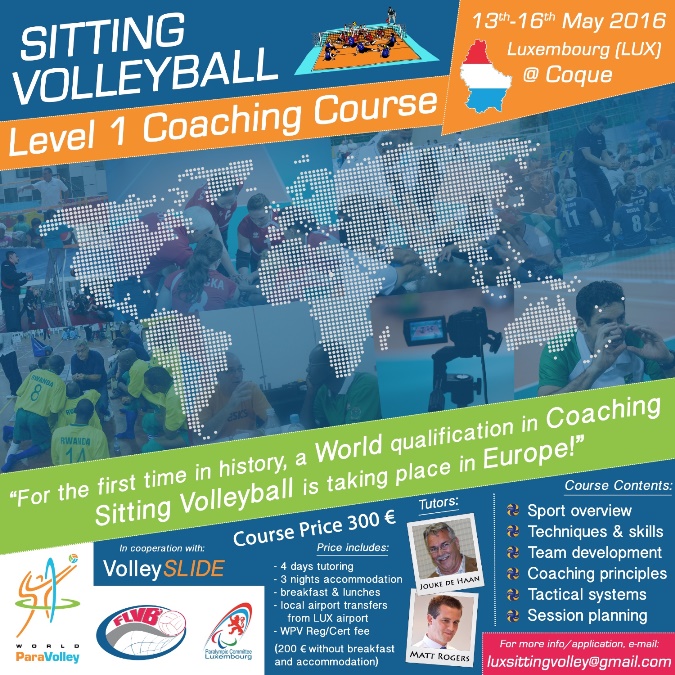